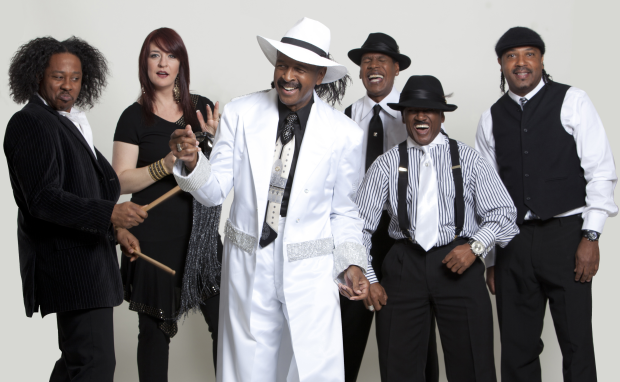 Larry Graham is gonna add some bottom. It’s what he does. It’s what he’s been doing for most of his career, even in the early years before he assumed the pivotal role of the thumping, funky engine driving numerous hits by “Sly and the Family Stone” in the 1960s and early ‘70s. Indeed, the consistent string of hits from the heyday of “Sly and the Family Stone” were built in large part on Graham’s innovative electric bass style that has been imitated by subsequent generations of funk, R&B, rock and jazz bassists.

In the years since his tenure with Sly Stone, Graham has charted an equally prolific and innovative course as a solo artist and as head of the funk collective known as “Graham Central Station”. Whatever the setting, he has spent a half century redefining the bass by pushing the limits of its potential as both a melodic instrument as well as a percussive tool.

Born in Beaumont, Texas, in 1946, Graham moved with his family to Oakland, California, when he was only three. By his early teens, he was fluent on guitar, piano, saxophone, clarinet and drums. One of his first major gigs was with his mother’s combo, the Dell Graham Trio, where he started playing guitar but later switched to bass – more as a matter of necessity than anything else.

When the band’s organ sputtered and stalled, there were no bass pedals to lay down the band’s bottom line. Graham rented an electric bass, figuring he’d use it temporarily to fill in the holes at the low end, then eventually get back to playing the guitar after the organ was repaired. But the organ was never repaired, and Graham stuck with the bass. Things got even more interesting when his mother scaled back the band’s lineup by dismissing the drummer – a move that required Graham to develop a bass drum and snare drum sound along with his bass line.

“Back then, there was the so-called ‘correct’ way of playing – overhand, with your two fingers,” says Graham. “That was the way most people played the electric bass. It was kind of a carryover from the way you would play an upright bass. But I never listened to bass players, because my first love was the guitar. I just kind of played it my own way, and that became my style. I didn’t really care about what anybody thought about it. I was just trying to get the job done.”

He got the job done, not just for himself but for generations to follow. For as unconventional as his style may have been at the time, it has since been adopted and refined by countless bassists representing a variety of genres, including Flea, Victor Wooten, Marcus Miller, Stu Hamm, Doug Wimbish, Stanley Clarke, Bootsy Collins and generations of others.

Graham took this unusual approach and ran with it – directly into the ranks of “Sly and the Family Stone” in 1966. For the next six years, he provided the churning undercurrent for hits like “Dance to the Music,” “Everyday People,” “Thank You for Letting Me Be Myself,” and several others. Along the way, he and the band redefined funk and made it accessible to a much broader audience than the genre had previously enjoyed. The high point, he recalls, was their performance at Woodstock in the summer of 1969.

Graham left “Sly and the Family Stone” in 1972. He then went on to produce a band called “Hot Chocolate”, which he eventually joined and renamed “Graham Central Station”. The original lineup included guitarist David “Dynamite” Vega, organist Robert “Butch” Sam, keyboardist Hershall “Happiness” Kennedy, vocalist/percussionist Patrice “Chocolate” Banks, and drummer Willie “Wild” Sparks. The group used the funk foundation that Graham had established with “Sly and the Family Stone” and sweetened it with various layers of soul, blues and other styles – a magical combination that scored the band a Grammy nomination in 1974 for Best New Artist. “Graham Central Station” released a string of seven albums throughout the ‘70s, and had a hit at the top of the soul charts in 1975 with “Your Love”, from the album Ain’t No ‘Bout-a-Doubt It.

After Star Walk in 1978, “Graham Central Station” went into a holding pattern when Graham released a solo recording, One in a Million You, the following year. He had a crossover hit with the album’s title track, which climbed to the top ten on Billboard’s Hot 100 chart. One in a Million You was followed by four more solo recordings throughout the ‘80s – some of which leaned more toward soulful balladry rather than pounding funk.

In the late 80’s Graham moved his family to Jamaica for seven years and took part – though on a less intensive basis - in some touring and recording with other artists, including Eddie Murphy.

In 1992 Graham reassembled “Graham Central Station” for the release of the Live in Japan album. The new line-up included George Johnson of the “Brothers Johnson” on guitar and vocals and Noriko “Mimi” Miyamoto on vocals and Funkbox. For the subsequent tours they got replaced by longtime collaborator Wilton “Fab” Rabb on guitar and original GCS band member Patryce “Chocolate” Banks on vocals and Funkbox. The line-up occasionally also got extended with some original “Sly and the Family Stone” members, including trumpeter Cynthia Robinson, saxophonist Jerry Martini and keyboardist/vocalist Rose Stone.

After recording the “Live in London” album in 1996 and releasing “By Popular Demand” in 1997 Graham’s chance meeting with Prince marked the beginning of a partnership that has lasted for 15 years.

“We were both playing in Nashville, and he heard that I was there, and he invited me to one of his famous aftershows,” says Graham. “It was at this club, and it was the first time we’d ever jammed together. It was just a natural thing. Every place I went with the music, he was right there with me. It was like we’d been playing together for years. He knew all of my music. At the end of the jam, he asked if I would join his tour. I did, and we became very good friends and neighbors in his hometown of Minneapolis, Minnesota.”

This led to Prince producing Graham Central Station’s 1998 album GCS 2000 and touring together.

Graham Central Station now makes its triumphant return with the release of Raise Up, a collection of 13 tracks that include new master recordings of three of the band’s favorite songs – “Now Do U Wanta Dance,” “It Ain’t No Fun To Me,” and “It’s Alright” – along with 10 new songs that mix funk, soul and pop, and deliver it with infectious horn arrangements and powerful vocals. The album features special guest appearances by Prince (on 3 tracks) and Raphael Saadiq, who – just like Graham and all the current GCS band members – also hails from Oakland, California.

Four decades after Graham Central Station’s first outing, the same potent ingredients that made the band a funk powerhouse in its early years are still very much in the mix: thumping funk rhythms, infectious melodies and riffs, tight grooves, and of course, that churning slap-and-pluck bass undercurrent that pushes it all into overdrive.

But somewhere in the midst of this party is an equally important emotional component as well, says Graham. “I consider the music that I make to be heart-to-heart music,” he says. “My main objective is to take what’s in my heart and touch your heart. I don’t want it to stop at your brain. If it did, you could just dispose of it the next day. I want it to get inside you, into your heart. My hope is that everything that I’ve done is a heart-to-heart connection, something that will stick and help you to raise up.”

Step into “Graham Central Station”, hop on board and make the connection.