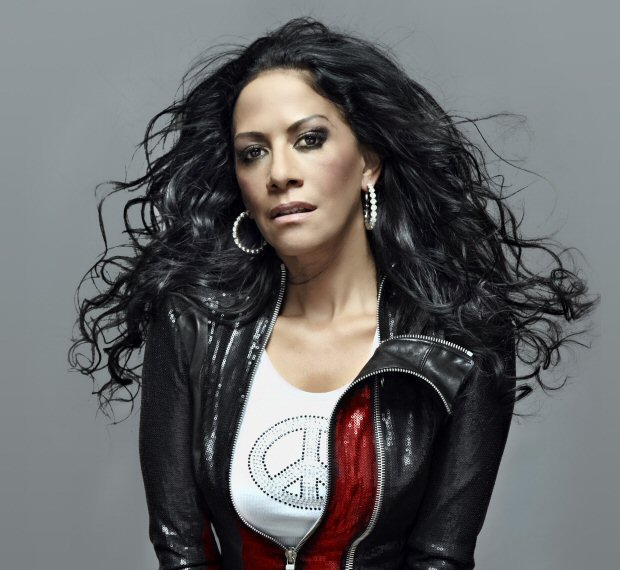 One of life’s constants for Sheila E. comes down to a simple phrase: follow the beat. And her impeccable inner rhythm is the pulse behind a trailblazing career that still knows no bounds.

These career checkpoints all converged in 2014 with two new Sheila E. projects. The release of her first album in 13 years, the aptly titled Icon (Stiletto Flats, March 25, 2014), then the indefatigable multi-talent added author to her list of accomplishments with Simon & Schuster’s 2014 publication of her autobiography, “The Beat of My Own Drum.” (Sept 2,2014)

Family, faith and music were guiding forces for Sheila E. growing up in the Bay Area. In addition to percussionist dad Pete, the Oakland, Calif. native counts former Santana member/Azteca founder Coke Escovedo and The Dragons frontman Mario Escovedo as uncles. Fellow Latin star Tito Puente was her godfather. In addition to being weaned on Latin jazz and Motown, Sheila E. was exposed to a diverse array of Bay Area acts. Those influences ranged from the rock of Jefferson Airplane and the Grateful Dead to the R&B/pop of the Pointer Sisters and the funk of Sly & the Family Stone. “I used to sit on the corner outside of the local community center with Twinkies and 7-Up listening to Sly and Larry Graham rehearse,” remembers Sheila E. “The sounds of the Bay Area molded me.”

So it’s no surprise that after such a music-immersive childhood, the gifted drummer/percussionist began amassing an impressive string of credits playing not only with her dad but also with pioneering talents like George Duke, Marvin Gaye, Lionel Richie and Herbie Hancock. Following a Bay Area gig in the late ‘70s, Sheila E. met mentor Prince backstage. Their Purple Rain recording sessions—including her vocals on the 1984 classic “Erotic City”—morphed into launching her solo career that same year. Debut album The Glamorous Life spun off the Grammy Award-nominated top 10 hit of the same name plus a second top 40 single “The Belle of St. Mark. Between her ‘80s tenure as drummer, songwriter and musical director for Prince’s backup band, Sheila E. released two more solo albums (Romance 1600 and Shelia E.) and scored another classic hit with “A Love Bizarre.”

Sheila E.’s fierce, dynamic verve onstage has made her a major concert draw since the ‘90s. Along the way, she has acted in several films (“Krush Groove,” “The Adventures of Ford Fairlane,” “Chasing Papi”) and launched various music projects (C.O.E.D., E Family Band). While continuing to play with Prince on select gigs, she added to her arsenal of credits such names as Ringo Starr (as a member of the Ringo Starr All Star Band), Gloria Estefan and Beyoncé as well as performing on the 2012 Academy Awards with pop hitmaker Pharrell Williams and composer Hans Zimmer. Sheila E. was also among the roster of stars chosen to perform at the Kennedy Center Honors whose 2013 honorees included artists Herbie Hancock, Billy Joel and Carlos Santana.

Away from the spotlight, music doubles as a source of healing and giving back for Sheila E. In tandem with the city of Oakland, she and her Elevate Hope organization staged the first annual “Elevate Oakland” benefit concert on Feb. 1, 2014. A host of Bay Area artists and other acclaimed musicians performed at the city-donated Fox Theatre. The goal: to raise funds to improve student academic achievement and attendance through music and arts programming. But this wasn’t Sheila E.’s first time giving back. Between gigs, she has also criss-crossed the country, speaking at schools and colleges, shelters, church organizations, music classes and clinics about music’s effect on her life and career. “Sharing music in any way I can is my

After ringing in 2014 in concert with Sergio Mendes on New Year’s Eve at Disney Hall, Sheila E. was ready for her Icon debut. With no Google or YouTube artist script to follow back then, she says her career drive was propelled by one thing: “I just did it because I loved it. And that’s what Icon represented. I started all this as Sheila Escovedo then became this persona named Sheila E. Now Sheila E. and Sheila Escovedo are the same person, still making music that comes from the heart.”

In 2015 Sheila E. will add to her business resume with the opening of The E. Spot Lounge in Studio City California. The 10,000 sq ft venue with stage, lounge, and restaurant facilities, will bring quality food and entertainment to the popular area. The year will also bring forth the growth of Sheila E.’s entertainment company Stiletto Flats Inc. with the release of new artists and artistic projects. 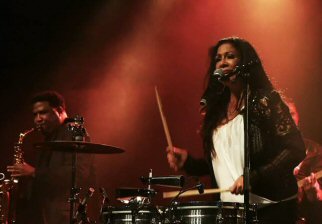